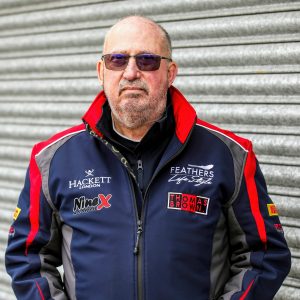 Simon’s first venture into motorsport was in the 1990s, as a director of Gmund Rennsport (GR). GR was the company formed to run on behalf of the Porsche Club Great Britain, their Porsche Cup and Classic Championships. At this time the RAC championship licences being held by the club. One of his roles was to attend each race, as the ‘bag carrier’ for the Race Coordinator, Charles Ivey. Charles was a perfect mentor for the rookie Simon, not only having been a driver, but also run a successful privateer team, competing at the 24hr Le Mans.

Additionally, the other vastly more experienced directors of GR, provided Simon with a vital racing entre. This experience ignited his passion for motorsport, as well as providing invaluable knowledge. Moving forward to 2013, a chance meeting between Simon and James Guess, resulted in the formation of the Feathers Motor Sport (FMS), Simon taking on the role as Team Manager.

This role is enhanced by his 32 years within International Banking, plus numerous directorships of varying small and medium companies, providing a business acumen together with hands on motorsport team management.