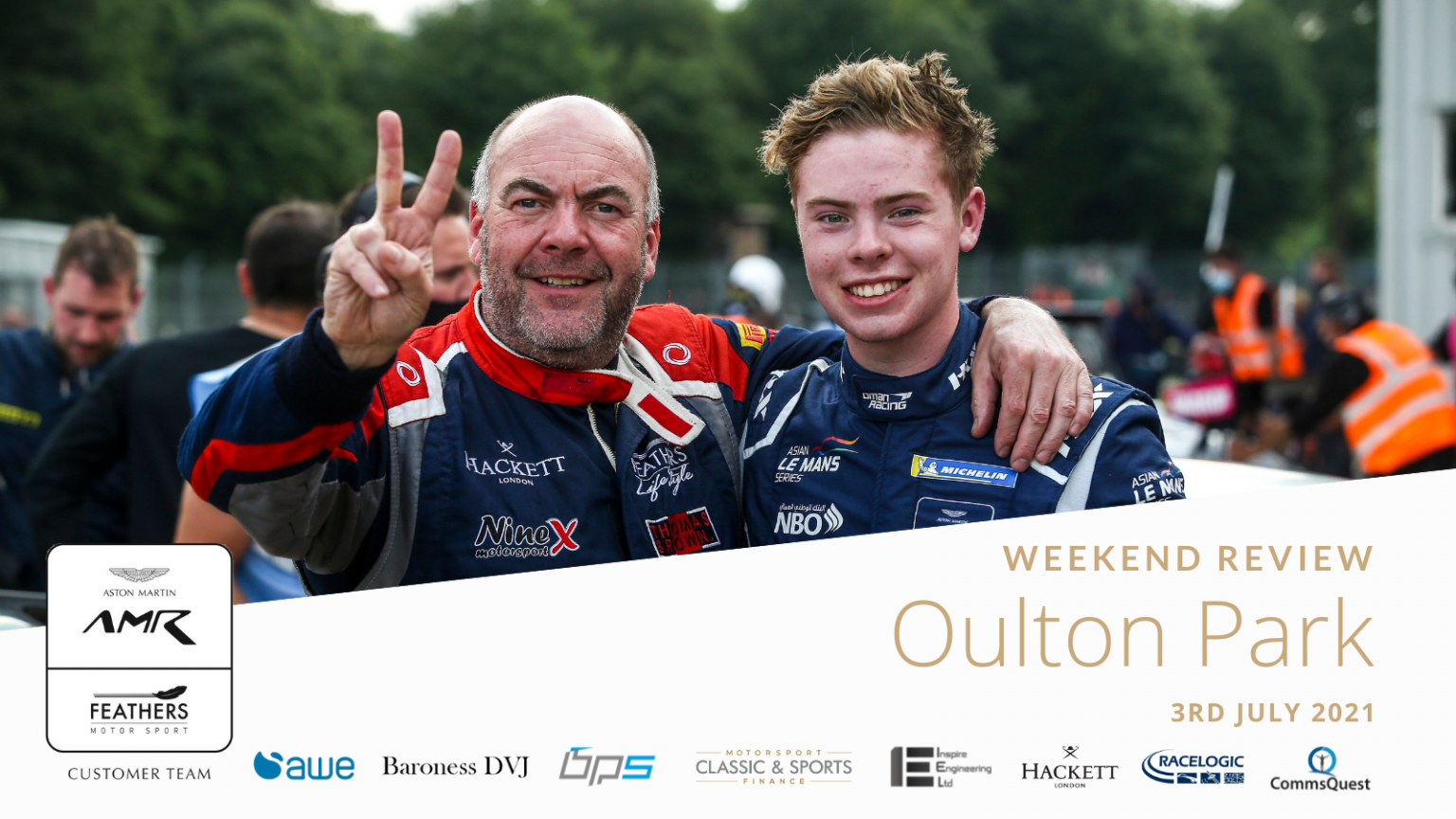 Feathers Motor Sport [FMS] maintained its run of GTH Class podium finishes in the 2021 GT Cup with a storming charge to second place in the latest round of the series at Oulton Park on Saturday (3 July).

The team’s regular driver James Guess was joined once again by the 2019 British GT4 champion Tom Canning – who stood in for Darren Turner – and the duo found themselves right in the thick of the action during a hectic one-day meeting featuring two 40-minute Pit Stop races. In fact, such was the competitiveness of the FMS Aston Martin Vantage GT4 at the Cheshire venue that the team came away frustrated not to have captured its fourth class win of the season.

Guess began Round 11 carrying a 20-second success penalty courtesy of FMS’s win at the previous Snetterton round, to be served during the pit stop. Having qualified fourth in class and 13th overall, he made a steady start on a track soaked by heavy rain, but quickly found his stride and began to make rapid progress.

Setting a stream of fastest laps, Guess reeled in the McLarens in front of him and by lap six was the class leader, having taken advantage of a slow car from another class bunching up the pack. Once clear of this gaggle, Guess built a significant lead and by the time he pitted he’d gained enough time over his competitors to put the team in contention for the win – even with the penalty.

Canning emerged from the pits with the lead intact, but alas he only got to enjoy it for a lap before he was called back in to serve a two-second penalty. The team had mistakenly sent him out too soon and he was forced to serve the rest of the required time in the pits.

Once Canning was under way again, the circuit dried out quicker than anticipated and with his wet tyres shot, the young Pro was unable to recover enough ground to improve upon ninth in class.

The second race provided an opportunity for another classic FMS fightback and the team duly delivered. Guess once again started from fourth in class and 18th overall – but this time the notoriously challenging track was bone dry and the sun was shining.

Guess got his head down, but his progress was hampered by an early four-lap Safety Car period. Once underway, he again found himself delayed behind a gaggle of cars in a different class as the leading McLarens escaped in clear air up ahead. All he could do was deliver a series of fast and consistent laps before pitting on lap nine, undercutting the leaders by a lap.

This gave Canning a window of opportunity, which he snatched readily. And, within striking distance of that same gaggle of cars, he tore his way through and up in to second with precise and ruthless passes. Once free of the pack, Canning took 12s out of the leader’s advantage in seven laps and set a sequence of class fastest laps.

Had the race been a standard 50-minute Pit Stop race, Canning would surely have been in contention for victory, but he had to settle for second at the line.

“Sometimes racing can be like this,” said Guess. “The conditions today were challenging, and as a team we did a great job to put ourselves in contention for both races, but things didn’t work out quite the way we’d hoped. We came away with another podium finish and we can look to how competitive we were across the weekend as a big positive.”

Canning added: “It was a pleasure to be back in the cockpit of the Feathers Motor Sport Aston Martin alongside James. I’m happy that we secured a podium with a strong run in the second race. I can’t thank the team enough for all their hard work and I look forward to joining them again for Donington Park later in the season.”

Team principal Simon Rose said: “The team was brilliant all weekend and didn’t put a foot wrong. We had the fastest package across both races, and I feel they deserved to be rewarded with at least one victory. Second place in Race Two came from an excellent team performance and I really feel that had the race run to the standard 50 minutes we would have been victorious. We move on to the next round at Silverstone confident we can get back to winning ways”

FMS is now 13th overall in the GT Cup Championship standings and is third in the GTH Class table with 161 points, 39 off the lead. 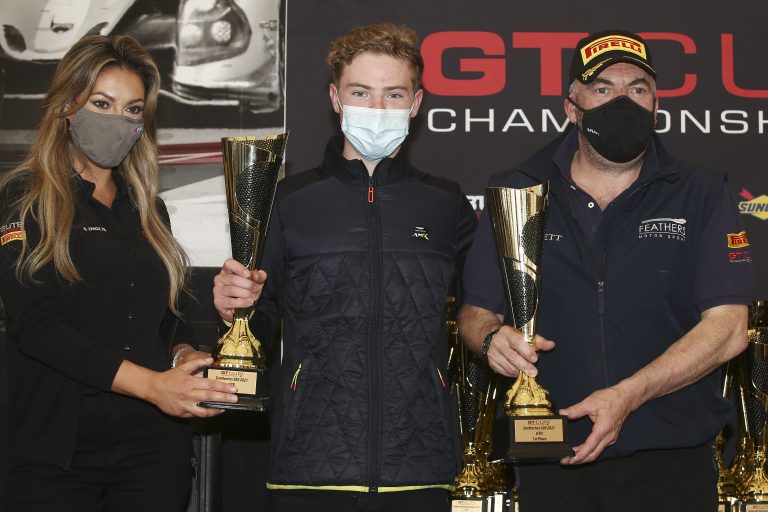 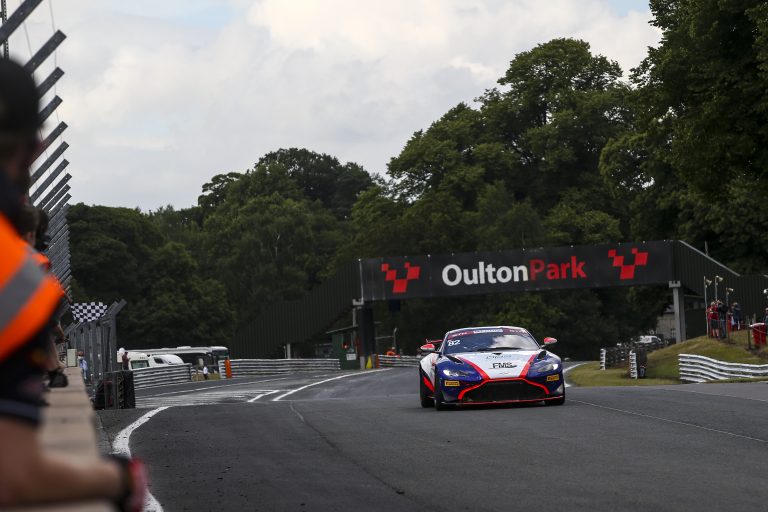 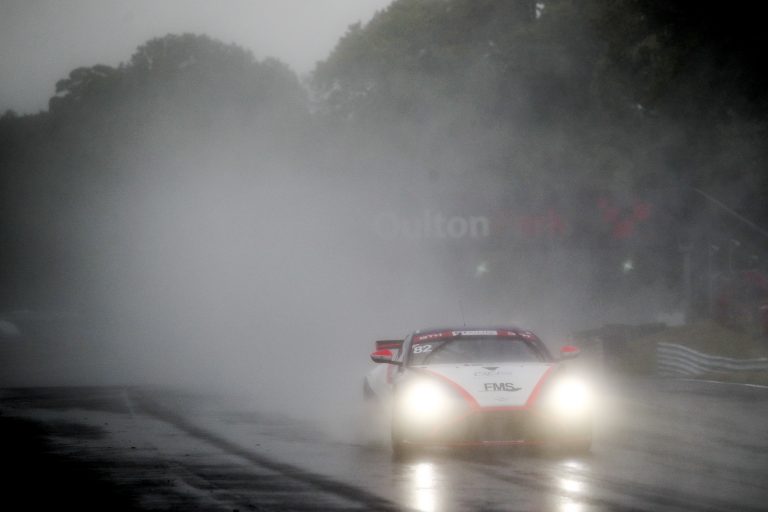