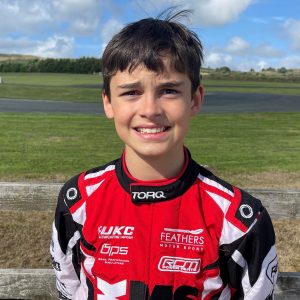 Archie started Karting aged 7, In His first full year of Karting he contested the MSUK British championship and won it!
Then he graduated to cadets, during this time he had many great results including Downforce UK’s Under 13 Driver of the year 2017, Leicester Mercury’s Junior Sportsman of the Year Finalist 2017, MSA’s first winner of F1 Future Stars Grid Kid at 2018 British Grand Prix and Shenington Kart Club Winter Series Champion 2019.

Despite Archie’s slim frame, he became too tall to complete his final year in cadets so the decision was made to move into Juniors early. As he is not old enough to race under MSUK rules in juniors (he’s 12), a couple of high profile Independent championships were chosen for him to race in, so that he could learn the class, the big kart and the increased speed.
These were the Ultimate Kart Championship in Junior X30 and the BKC running in an OKJ pooled engine championship.
Already Archie has a comfortable lead in the BKC championship and is lying within the top 10 in the UKC.