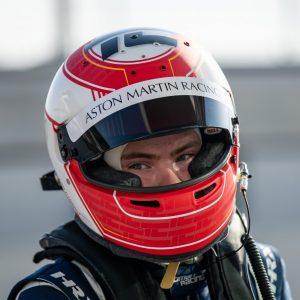 During 2019 Tom was also chosen to be a member of the Motorsport UK Squad and Autosport ranked him the Number 1 British GT4 driver of the year.

2019 was a fantastic year for Tom, building on 9 years of focus, determination and success. The pinnacle of 2019 was Tom’s win in the British GT4 Championship with TF Sport in the Aston Martin Vantage. This was the car’s debut season in the prestigious British GT Championship. As well as showcasing the Vantage, the Championship was a demonstration of Tom’s skill and maturity as a driver and his record-breaking track times.

In 2020 Tom had his maiden race in the Aston Martin GT3 at the International GT Open, Spa Francorchamp with TF Sport. Tom and Ahmad Al Harthy won a 1st and a 6th – a truly great weekends racing. Tom also raced in the British GT Silverstone 500. A great experience alongside Giacomo Petrobelli.

Tom raced in the Asian Le Mans Series during February 2021 with Oman Racing with TF, with team mates Jonny Adam and Ahmad Al Harthy. A great experience racing at the Dubai Autodrome and Yas Marina in Abu Dhabi. The team came 8th overall, great pace, just not the result they had hoped for due to elements out of their control.